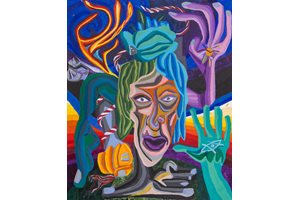 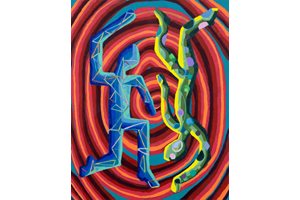 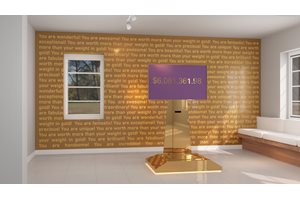 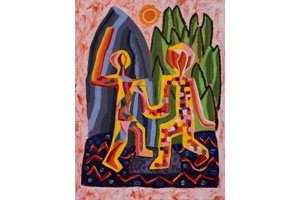 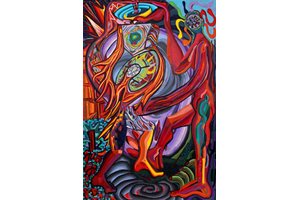 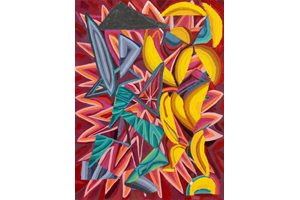 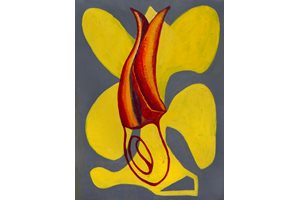 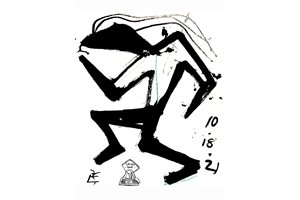 Atelier Benito is the studio name of artist Benito Esquenazi.

Benito is honored to participate in this year's Aqua Miami 2022 Exhibit.

For more background information, please read his artist bio below.

ARTISTS EXHIBITED AT THE SHOW:

Benito Esquenazi is exhibiting artworks created during the pandemic and through the date of the exhibit.

Benito's interactive sculpture "You Are Worth More Than Your Weight in Gold" will debut during Aqua Miami 2022. This even will be accompanied by minted crypto-coin "MyWiG" which will drop for free to anyone that registers ther Web3 wallet during the duration of the exhibit.

My studio practice is primarily painting and drawing. Though currently, my work is expanding into multi-disciplinary experiences that involve performance art, dance, and interactive works.

​To be completed an artwork needs to be seen, and I believe that the purpose of art is to change the way people see themselves and the world around them.

When a work of art lands with a viewer, they enter into an informal arrangement with it. Where if the person gazing puts the time to experience the piece; the work reveals its secrets that are beyond the capability of the artist who created them to understand.

​Using the limitations of language, my work explores the formal qualities and constraints of the medium I work in. Combining, re-arranging, breaking-apart, creating, and finding new models of communication within my medium.

I am excited by and explore much figurative and experiential content in my work. Especially the human form, music, dance, street art, poetry, personal life experiences, and dream-life. I combine these inspirations that move me with the cadences of memories, sounds, and words to animate my creative output. Ongoing dialogues within my work engage current and past masters, which ultimately allows me to break through with my unique voice and vision.

I knew I wanted to be an artist since I was five years old. I moved from Santiago de Cuba to Miami Beach in 1966 with some of my family. One of my earliest memories in Miami Beach was when working intently on a finger painting alone in the sink-room of my kindergarten classroom, saying with certainty that I was going to be an artist, “just like Picasso,” when I grew up. When I was 12 years old, I took painting classes and further committed to it after graduating from Miami Beach Senior high school; while attending Miami Dade Community College - North Campus from 1979-1980. At Miami Dade, I studied with Robert Thiele and Salvatore La Rosa, who were generous with their teachings and friendship. I also studied independently with Roberto Martinez during those years. These experiences gave me the confidence to move to New York City, my spiritual art home, to pursue an art career. I moved to New York in 1981 to study drawing and painting at Pratt Institute. I studied with Ernest Briggs, Rudolph Baranik, Richards Ruben, and Jenny Snyder. I graduated from Pratt in 1984.

I worked very hard as an artist during college and gained much from the experience. However, I felt that I lost something meaningful through my formal art education, becoming a less intuitive artist through that process. Therefore, it became my mission in my 20s to un-learn as much as I could and reconnect with the raw, intuitive source that once spoke to me clearly.

New York City in the 1980s provided fertile stomping grounds for exploring everything from street art to fringe music amid a gritty and explosively creative NYC environment which I was fortunate to take part in. Living in Greenpoint in 1984, then Williamsburg, Brooklyn between 1985-1988. I spent most of my time in the Lower East Side art scene, which enabled me to merge my formal art training with the culture of the moment. I maintained a rigorous studio and street-art practice at nights and on weekends. I paid the bills with day jobs as an art handler for galleries and art service companies. I also had the privilege of working as an artist assistant to Jack Goldstein for a short time. This all helped me tap back into my intuitive source and develop my style as an artist. From the mid-1980s through the mid-1990s, I focused on creating a “personal mythology” through an "Angel" series that explored the journey of an angel who could leap across space, time, and dimensions.

I participated in group shows during this time. I curated a "New York-Miami, Miami-New York Exchange Show" that brought together over 80 artists from both locations to show in each other's city.

During the late 1980s to 1994, I ran an art-service company and continued my studio practice.

In 1994-1995 I opened and ran one of the first art galleries on the Lower East Side called ArtTrax located at 100 Orchard Street. Where I curated a series of 5 exhibitions titled "Technological Disconnection." We showed various artists including James Siena, Mark Sheinkman, Christopher Gianakos, Will Insley, Betty Woodman, RM Fisher, Nam June Paik, Marry Miss, Gyorgy Kepes, and others.

In 1995 I paused my art practice to raise my five children. I was a single dad for some of those years, so it was challenging to find time for a studio practice. In 2015, I was able to return to my formal art-making practice. Now, at 61 years old, I once again spend the majority of my days and nights in the studio. Exploring social themes, ancient and discovered personal mythologies. The human form, social themes, street art, and formal art considerations remain a significant part of my work as I continue to explore archetypes and gender roles, boundaries, and the role of an artist in our day.

Do not hesitate to say hello, talk art, inquire about a hair-brained project, the purchase of my work, or have any interest in showing my work.

​Since the art is not complete until someone gazes on it!

Thank you for your interest in my story and, hopefully, my work.